Preserving the memory of our ancestors is at the heart of our work. Here you can find out more on the history of Gul Mawaz Khan and the Raja Family, along with a timeline of critical events that lead to the creation of this foundation.

Honorary Captain and Risaldar Major Gul Mawaz Khan was Babar Raja’s great grandfather, and a major player in the Arab Revolt and World War I. Born to a famous military hero, Major Nadir Ali Khan (see below), Gul Mawaz grew up with the values of loyalty and courage instilled in him from a young age.

An accomplished horseman, he quickly rose through the ranks of the cavalry and became noted for his calm and clear head in the face of conflict. He was made a Risaldar Major (cavalry officer) in the 19th King George V’s Own Lancers. He was later appointed to appear on King George V’s official staff in 1911, and, for his services in World War I, received the Order of British India, second class and then in 1919, first class. The main person to correspond personally with King Hussein bin Ali of Mecca on behalf of the British, Gul Mawaz Khan was a crucial figure in the war effort. The Ottoman Empire, fighting alongside Kaiser Wilhelm’s Germany, posed a serious threat to the British during World War I, and convincing Arab factions to support the British was a game changer for Britain.

The success of the intelligence mission, in which he developed networks of support for the British in the Arab Revolt and gained intelligence on enemy activity, and was also acknowledged by King George V.

But his efforts were never fully recognised, despite being recommended for the Military Cross. This oversight was such that his superiors in the Indian Office wrote of the incident to Foreign Secretary Austen Chamberlain, in 1924, stating to that Gul Mawaz Khan had been “badly mistreated… he has sacrificed a great deal and has received no compensation. In these serious times in India those who are loyal and true deserve the full thanks and recognition of the government.”

Risaldar Major Nadir Ali Khan Sardar Bahadur, was one of the British-Indian Army’s most successful, highly decorated soldiers, and a brilliant strategist. He was one of only 13 Indian officers to serve as Royal Escort to Queen Victoria during the Golden Jubilee celebrations of 1887. He was recipient of the Afghan War Medal and Jubilee Medal in the same year.

Noted for his dedication to his regiment, he was also nominated for the Indian Order of Merit – one of the highest awards of the day – for his efforts and service. Fighting some of the most notoriously merciless forces of the time, he carefully managed his soldiers’ behaviour to ensure minimal injury, death and cruelty. He famously fought against 700 Wazir warriors with only 37 soldiers, and managed to disperse them and prevent them from attacking a British convoy. Stories of the British Indian Muslim cavalry officer being full of adventure, danger and bravery captivated the imagination of the British press and public.

Nadir was such a valuable part of the force that he was even photographed by Queen Victoria’s own photographers, A&G Taylor, an unusual occurrence in all but the most impressive of Indian soldiers’ records.

He died of pneumonia after 32 years in the force, while still in service. Through this initiative, his descendents hope that his contribution will live long in the memory. 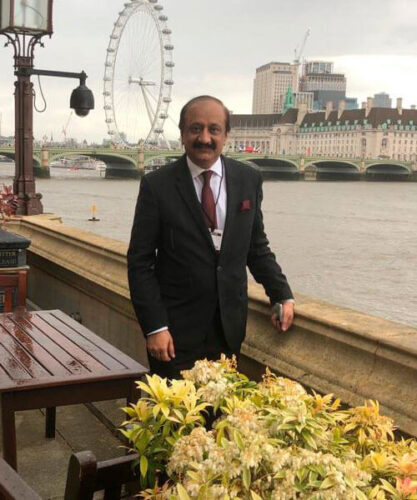 The Foundation was launched on 2nd May 2019, at an event held at the House of Lords in London. It was hosted by The Lord Sheikh – who has been devoted to supporting the Muslim community as a life peer since 2006.

Guests came from across the faith communities and the voluntary sector, as well as authors, journalists, commentators and representatives of the British Armed Forces.